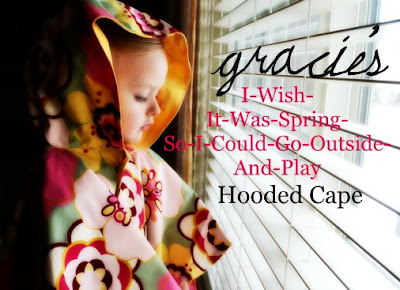 Catchy title huh?
I actually started this hooded cape for Grace forever ago but never got around to finishing it until this afternoon.
This week over at Project Run and Play the theme is outerwear and since I can’t resist making a little something to play along I pulled out Gracie’s cape and finished it.
Unfortunately Gracie is a little under the weather with a cold today so I took some pictures with her wearing her new spring cape inside.  But all she wanted to do was to watch the snow melting out the window and wish she was out there enjoing some sunshine.  She’s been dying to play outdoors for days and even though it was freezing I caved.  So for the next 15 minutes we…

…made new tracks in the snow… 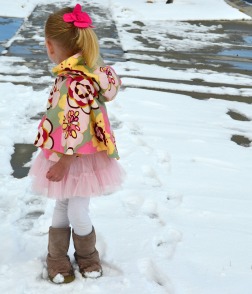 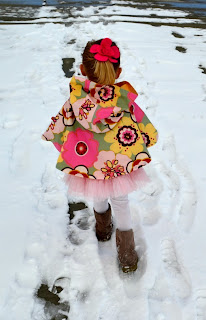 …and generally just ran around and enjoyed the fresh air.
However, it ended as soon as it began because Grace already has a cold and because, after all, this is a springtime looking for bugs kind of cape and not the middle of winter play in the snow kind.
Oh, Gracie, you’re not the only one who is ready for spring and for hours spent playing in the yard.  I’ve got spring fever something fierce.  Anyone else or is it just me?