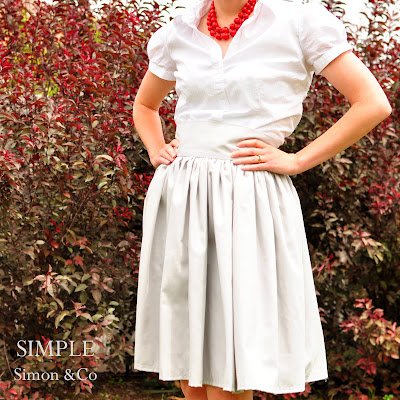 So night before last the kids were snuggled into bed and my husband was doing some work so I decided to make myself a skirt to put into the flicker group over at Crafterhours skirt week.
It seemed like a good idea and since I never sew for myself I was kind of excited.
I went downstairs, rummaged through my vintage pattern pile, hoard, collection and found one that I thought would be fun for the summer.

It’s a McCall’s Pattern from 1960 that I bought at Deseret Industries for 50 cents and it’s FUNNY!
It is a pattern for that little blue jumper and a skirt to wear ON TOP of that!
(It’s kind of like the I-could-go-to-a-clam-bake-or-a-bake-sale pattern!  I love it!)
So I grabbed some fabric I bought at a thrift store for $3 and a zipper I bought at Savers for 49 cents and I was ready to go.
I had it all cut and sewn before going to bed.  It was awesome…
…until…
yesterday morning when I tried it on.
Oh, it fit.
And it wasn’t too short…
or too tight…
or too ugly…
and I was even pleased with the high waistband I added instead of the thin one the pattern calls for.
I just decided that it could use some pockets sewn into those side seams.
Yes, it definitely needed to have pockets.
So I sat down cut out some pockets and went about inserting the first one.
This was going to be a breeze and as I worked I complimented myself on adding just what the skirt needed.
Everything was going great, the kids were munching their breakfast and I had just finished up the first pocket in no time flat.  (And it looked fantastic!)  But I decided I better test it out before putting in the second one.
It was only then I saw my fatal error.
You see the skirt is sewn together in 4 pieces.  So there is a seam in the back with a zipper and the hook and eye closure and then there is a seam on each side and one right down the front.
Yup, right down the front there is a seam which is EXACTLY WHERE I PUT IN THE POCKET!!!!
I don’t know what I was doing but I obviously wasn’t paying attention and I ended up with a perfectly placed, nicely sized pocket RIGHT IN MY CROTCH!
Ok, there are a lot of things in life that I don’t need and a pocket in my crotch is one of them.
What am I a kangaroo?
So I let out an AGHHHHHHH!!!!
And then spent the next million years unpicking the pocket and fixing the front seam.
When I was done with the mending I decided that this skirt definitely should not have pockets and declared it officially finished.
And I stand by that decision—with my red beads and favorite red heels no one will ever say, “You know what that skirt needs is some pockets—especially one right in the front.”
(Especially one right in the front.)
So, that being said, I’m off to upload my pocketless skirt into the flicker group.  I’ll catch you all later.
-liZ
PS:  Yes, everything I used to make this skirt came from some sort of thrift store…but…No, I didn’t make the jumper to go under the skirt…yet…