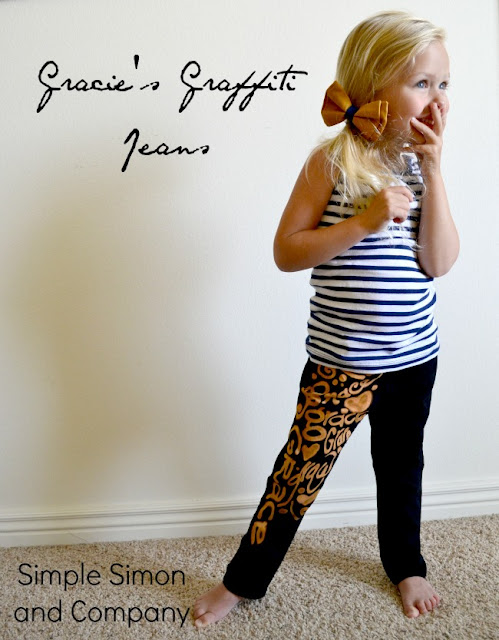 I am loving all the printed jeans I’ve seen lately…and I really wanted to make some for Grace.
So this week when I was out and about I bought a really inexpensive pair of jeans and a bleach pen and went to work.
There are several ideas that I wanted to try that involve bleach but I started with graffiti.
Actually the idea was originally to make one of the leg panels look like the subway art that is everywhere but then I decided—it is everywhere—it doesn’t need to be on Gracie’s pants as well. SO I went with a more graffiti style panel instead.
The first thing I did was trace the shape of one of the legs onto some brown paper that I had. 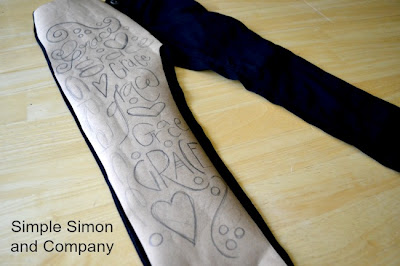 Next I started drawing out Grace’s name and two of her favorite things (hearts and polka dots) all over it.  When I got the way I wanted it then I redrew the same design with my pencil right onto the pants.
(Sorry I didn’t do it in a super clever way…I’m just old fashioned like that…a pencil and winging it…which means if I can do it you can do it to.)

After I had everything all drawn out I took my bleach pen and traced over the lines.
Then I let it sit for about 10-15 minutes, rinsed all the bleach out, and let dry.
Graffiti jeans finished.
Now that I’m done I learned a few things like:
#1.  Even though the tip of the bleach pen is small, the bleach doesn’t come out in a really thin line.  (Because of this you can see that once I started I improvised a little over the design I originally drew because the lines were thicker than I anticipated.)
#2.  When you apply bleach to black fabric it comes out a rusty color and not white.
(Although it would have turned white if I would have done another application…but then it would also compromise the fabric….)
#3.  The more bleach you use the more air gets inside the pen and causes air bubbles that will sputter.
#4.  I need to try out the other 2 ideas that I have that will use this technique.
One of those ideas involves patterns…

(I tried this idea out using a stencil on the back pocket of an old pair of jeans before attempting one of Gracie’s new ones.)
Here I learned that the bleach will spread out under the stencil and make my pattern look all blobdiggity.
(However—if I were a freezer paper stenciler I think I would try that because I totally think that would work.)
And because I am in love with how the bleach looks on the light jeans you can bet that it is on these kind of levis that my next bleach project will happen on.
So that is that.
I learned some stuff…I’ll change some stuff…and I’ll get going on my next 2 bleach on jeans projects.
-liZ
PS:  I know it is supposed to be “Thrifted Thursday” today but I got a little too excited about these pants and wanted to share them…sorry…sometimes I get like this and there’s nothing that I can do about it.