A little more than 2 years ago I had baby Ruth.
Along with my sweet baby came some very unexpected complications.
Complications that took me over a year and hours worth of physical therapy to overcome.
Prior to my pregnancy with Ruth I had been involved in running quite a few races with my siblings but after the delivery I could barely stand up-right and running again seemed to no longer be an option.
But I was lucky…and about a year ago I was able to start running again.
(And because I’m a big baby I cried big old crocodile tears the first time I was able to get back on the treadmill and run without pain.)
It was like starting all over again…building up speed and mileage but I didn’t care…I was just happy to be able to move again!

Now I’m back to running with my siblings and while I’m still not fast. I am running again!

This photograph was taken at a race this spring with my brothers, sister, dad, and cousin:

We actually are an unlikely group of “runners”.
(Joggers is probably more accurate.)
But we have fun.  A LOT of fun…whether it’s relay’s, 5K’s, or marathons it’s ALWAYS a good time.
No, we don’t ever come in first…or close to it…but, like I said, we ALWAYS have a good time.
And it’s contagious.

Recently Simon decided that he wanted in on the fun.  So my husband and I started taking him out for a mile or two at a time just to see how it would go…and we told him that if he wanted he could train for a race.

That’s when he announced that he was going to run a marathon with me.
Well, that’s a pretty tall order for a 9 year old so we discussed perhaps beginning with a 5K.
He agreed and things are set for him to run a race with all of us this fall.

We then found a track team that is built to allow for kids of all ages to join the team so we signed Simon up and he attends weekly.  (Although he wishes it were more often.)  The team works their kids hard but Simon loves it and a few weeks ago he ran in his first official race.

It was exactly 1 mile long.
And he LOVED every second of it.
He didn’t win BUT he ran the entire way, never stopping to rest or walk.  Plus at the end he had enough energy to sprint the last distance and even pass a few of the runners that were ahead of him.
He was triumphant!

Simon has another, longer race coming up soon that we are all excited about.  His training is challenging but he is seeing results and before long he’ll be running that 5K also without stopping.

From there, who knows?  But if he wants to keep going and run a marathon…I’ll support that…because I know that if he puts his mind to it, he can accomplish anything…even if that thing is running a marathon before he turns 12. 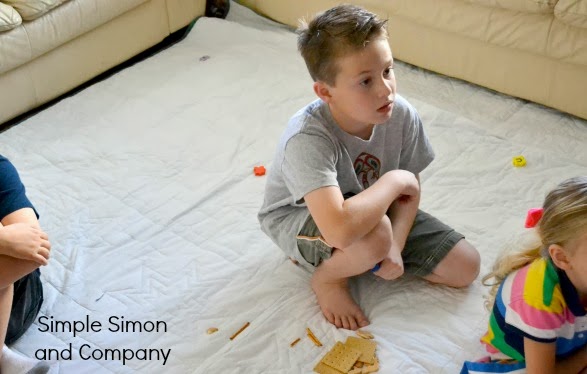 Simon and Grace (along with some friends) spent an afternoon glued to the movie and it was fun to hear their chatter about Mike and Sully.  As I watched the movie with them I decided I liked it even better the second time…plus, I got to have a sweet conversation with my kids about working hard to achieve your goals, and about how NOTHING is ever impossible.
Life isn’t always easy…sometimes bad things happen…and everything isn’t always fair…but that doesn’t mean you can’t still achieve your goals.  I want my kids to know that.  I also want them to know that achieving your goals is worth it…even if it takes a long time and is very hard.
I am so grateful to be “running” again.  And I am extra happy to have a new running side kick.  I think working together to accomplish challenging goals is going to be a powerful experience, for both of us.
Monster’s University will be out soon for purchase:  Own It First On Digital HD 10/8 & Blu-ray™ Combo Pack 10/29 and to celebrate we’ve teamed up to give you a chance to win a Monster’s University Blu-ray combo pack and a $50 gift card.  To enter to win all you need to do is leave a comment here answering this question:
“How did you believe in yourself and achieve your Dream?”

Rules:
No duplicate comments.
You may receive (2) total entries by selecting from the following entry methods:
a) Leave a comment in response to the sweepstakes prompt on this post
b) Tweet (public message) about this promotion; including exactly the following unique term in your tweet message: “”#SweepstakesEntry””; and leave the URL to that tweet in a comment on this post”
c) Blog about this promotion, including a disclosure that you are receiving a sweepstakes entry in exchange for writing the blog post, and leave the URL to that post in a comment on this post
d) For those with no Twitter or blog, read the official rules to learn about an alternate form of entry.
This giveaway is open to US Residents age 18 or older. Winners will be selected via random draw, and will be notified by e-mail. You have 72 hours to get back to me, otherwise a new winner will be selected.
The Official Rules are available here.
This sweepstakes runs from 10/3/13 – 11/3/13.
Be sure to visit the Monsters University Page on BlogHer.com where you can read other bloggers’ reviews and find more chances to win!